The word  fibromyalgia comes from the Latin term for fibrous tissue (fibro) and the Greek ones for muscle (myo) and pain (algia). Fibromyalgia syndrome is chronic disorder which includes widespread muscle pain, fatigue, and multiple tender points that affects 3-6 million people in the United States. For reasons that are unclear, more than 90% of those who develop fibromyalgia are women.

Do you feel sick and tired and achy all of the time?  Is the pain worse in the morning, often with increased muscle stiffness?  Do you feel fatigued every day, even after a full night’s sleep?  Do you have restless sleep, insomnia, headaches, irritable bowel syndrome or other digestive or elimination problems, terrible premenstrual syndrome, chest pain, nervousness or excessive stress, an intolerance to cold or damp weather?  Do you feel anxious or experience heart palpitations, feel depressed or suffer from chronic fatigue syndrome?  Are you frustrated that no one has been able to help you?  With all of your medical tests giving normal results, you may even begin to wonder if any of it is real.  What I’ve just described is VERY REAL, but little understood condition which is neither disfiguring nor life threatening.  It is called fibromyalgia:  ‘fibro’ meaning fibrous and connective tissue; ‘my’ meaning muscle tissue; and ‘algia’ meaning pain.  This pain syndrome is not specifically a disease, but rather a group of symptoms.  It wasn’t until 1990 that specific criteria for diagnosing fibromyalgia was developed.  What many doctors have been diagnosing and treating as arthritis, sleep disorder and depression may actually be fibromyalgia. Conditions often associated or combined with fibromyalgia are:  Crohn’s Disease or Irritable Bowel Syndrome, Migraine Headaches, PMS, thyroid disease and some skin diseases such as chronic eczema or psoriasis.  As you read on you’ll find that treating each these conditions as though they are separate entities simply doesn’t work.  While one symptom may improve with certain medical (medication) treatment, the others often get worse.

For years, there has been no published literature by either researchers or medical doctors that has recognized a known cause for fibromyalgia.  Although there are many different theories, some pointing to an initial illness or parasitic infection, others believe trauma (either physical or emotional) can be the precipitating event or cause. Other theories indicate rheumatoid arthritis, genetic predisposition, low blood flow to a specific area of the brain, increased substance P in the spinal cord and reduced mitochondrial production of ATP.  However, each sufferers’ history, onset and genetic make-up is so different, a common cause has still not been identified.

My experience with fibromyalgia treatment patients has been no different.  One patient might identify the onset with an illness like Mono or Strep,  another patient might relate onset with a physical injury, fall, car accident, or even child birth, and yet someone else may not be able to identify a specific onset at all.

The common thread I’ve found in the majority of patients I’ve helped with fibromyalgia, is that the condition had been building for a very long time, and the triggering event is really the proverbial straw that broke the camel’s back.  A long history of allergies or digestive complaints is often evident.  In some cases, the downward spiral started very early in childhood with illnesses such as ear infections or allergies and the prescribing of antibiotics.  Other times slow developing digestive complaints, like heart burn, constipation, as well as, even the use of anti-acids and acid inhibitors really spikes the plunge or descent to illness.  While stories will vary somewhat, that common thread of untreated or improperly treated illness seems to always stand out to me.

There are no specific tests to identify fibromyalgia.  Patients who undergo a series of tests are often told all the findings are normal.  The diagnosis is often made by identifying specific symptoms along with ruling out other disorders.  The presence of pain and aches all over, accompanied with fatigue and having at least 11 of 18 tender areas are also used in diagnosing fibromyalgia.

Fibromyalgia can be very difficult to treat because not all doctors are familiar with it and its treatment, so it is important to find a doctor who is.  The treatment for Fibromyalgia often requires a team approach, utilizing chiropractic care, trigger point therapy, massage, functional medicine (specific nutritional support), and Acupuncture, as well as exercises and stretching. 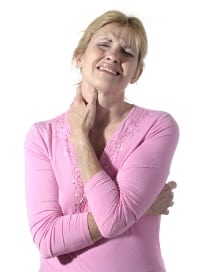 A combination of chiropractic, trigger point therapy, and lifestyle changes has proven to be very effective in decreasing the severity and duration of the physical pain of fibromyalgia.

Chiropractic care is critical for those who suffer from fibromyalgia in order to keep the spine and muscles from losing too much movement. Because fibromyalgia causes the muscles to tighten up and lose some of their natural pliability, it results in a global loss of movement in the spine. The loss of movement in the spine results in a neurological reflex that causes the muscles to tighten further. This vicious cycle will continue and over time will lead to increased pain, increased muscle tightness, a loss of movement, more difficulty sleeping and the development of more and more trigger points.

The only option is to continually adjust the spine and keep it moving. It is not uncommon for those with fibromyalgia to be adjusted three to four times per month to keep everything mobile and relaxed. The biggest concern in treating people with fibromyalgia is that their muscles have a diminished healing ability. For this reason, I typically combines chiropractic adjustments with other therapies and specific nutritional support to improve healing of the muscles.  Your adjustments may also be modified or made gentler to prevent stress on the ligaments and muscles. This helps to decrease the stress on all of the small supporting muscles of the spine, which can be easily injured. It is important when seeking chiropractic care, to make sure that the doctor is familiar with the muscular changes that occur with fibromyalgia so that they can adjust their treatment accordingly.

According to the American College of Rheumatology (ACR), fibromyalgia is defined as a history of pain in all four quadrants of the body lasting more than 3 months. Pain in all four quadrants means that you have pain in both your right and left sides, as well as above and below the waist. The ACR also described 18 characteristic tender points on the body that are associated with fibromyalgia. In order to be diagnosed with fibromyalgia, a person must have 11 or more tender points. In addition to pain and fatigue, people who have fibromyalgia may experience:

Fibromyalgia is often confused with another condition called “myofascial pain syndrome” or “myofasciitis.” Both fibromyalgia and myofasciitis can cause pain in all four quadrants of the body and tend to have similar tender point locations, but the two conditions are worlds apart. Myofasciitis is an inflammatory condition due to the overuse or injury to your muscles, whereas fibromyalgia is caused by a stress-induced change in metabolism and healing. Myofasciitis tends to come on rather suddenly and is usually associated with a particular activity or injury. True fibromyalgia has a slow, insidious onset, usually beginning in early adulthood. It is very important to diagnose each of these correctly, for they require very different approaches to treatment. Unfortunately, fibromyalgia is a chronic condition, meaning it lasts a long time – possibly a lifetime. However. it won’t cause damage to your joints, muscles, or internal organs.

I found that a combination of these treatment methods seems to elicit the best responses.  include dietary changes and specific nutritional support, removal of food allergens and toxic chemicals, chiropractic adjustments, and or acupuncture treatments. Of course stress management is a must do.  If needed, physio therapies (electrical muscle stimulation, ultrasound, ice, heat and myofascial release) may  also be used to reduce pain and inflammation, and exercise may be prescribed to boost feel good hormones and enhance detoxification.

Several years ago I had been diagnosed with fibromyalgia.  I suffered daily from muscle and joint pain, edema, restless leg syndrome, Barret’s Esophagus, IBS, depression and fatigue.  Other doctors tried different drug therapies, but nothing seemed to work. It was then that I decided to come see Dr. Hoch.  Dr. Hoch told me that although progress would be slow, she could help me to improve my health.  We started with Acupuncture, dietary changes, and nutritional supplements for my many symptoms.  When I could tolerate it, she added spinal adjustments to my care plan.  I was so relieved when I experienced improved digestion and no longer felt like my belly was going to explode. Then, I began to notice I had less and less pain, and I was sleeping better at night. Soon I was able to go to work every day.  Steadily, I began to have more and more good days, and eventually more good days than bad.  Flare ups are now a rare thing.  My condition is well managed by the care I receive from Dr. Hoch and her staff, and I’m once again enjoying my life.  My husband sees a definite improvement both emotionally and physically.  My husband was so grateful for my improvement that he drove to Dr. Hoch’s office to personally thank her for “giving him his wife back”.  We are now both happy, healthy Chiropractic Wellness patients.    ~B. P.

I was looking for an alternative answer for my fibromyalgia pain.  I didn’t feel like I was getting any better with my medical doctor’s fibromyalgia treatment, and experienced horrible side effects from the medications he prescribed.  My goal was to get off as much medication as I could.  My family knew I was searching for help when my sister called and told me about the wonderful success my niece was having with her headaches and allergies since seeing Dr. Hoch.  She said I should definitely look into it, and call to schedule an appointment. Dr. Hoch was so much more informative than anyone I’d previously seen.  I’ve had 3 surgeries in 5 years, and my health was continuing to decline.  I ended up in the emergency room several times following each surgery and each time I was prescribed a different medication. I’d had enough!  Dr. Hoch has been a Godsend.  She recommended some very specific dietary changes, supplements and chiropractic treatments. Since starting her care plan my IBS (Irritable Bowel Syndrome) is nonexistent!  The muscular pain I had been experiencing is so much better, and I feel so much more flexible.  I’m already off one of my medications and we are working through the rest of my issues.  I see a HUGE improvement after finding Fibromyalgia relief and can say that I finally see “the light at the end of the tunnel”!