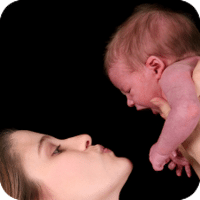 Gentle chiropractic adjustments can improve symptoms of colic in newborns, such as an unusual amount of crying.

Colic is a condition in young infants characterized by an unusual amount of crying.When they cry, they may draw their arms and legs toward their bodies as though they are in pain and may even turn bright red. Colic usually appears between the 3rd and 6th week after birth and is typically resolved by the time they are 3 months old. Although no one is certain what causes colic, there are a number of things that likely contribute, such as an immature and irritated nervous system, food sensitivites and gastrointestinal upset.

The theory that an irritated spine may contribute to colic is supported by the frequent improvement in symptoms with gentle chiropractic adjustments. Because the birthing process is very stressful on the neck of a newborn, it is very common for there to be several subluxations in the neck and back that can irritate the tiny and delicate nervous system. It has also been observed that babies with colic seem to need more attention and are more sensitive to the things around them than other babies – again indicating that there are some neurological differences.

Both the mother’s and the baby’s diet can be huge factors in the development of colic. One of the biggest offenders is cow’s milk. Babies should not have cow’s milk, or dairy in any form for that matter, until they are at least two or three years old. Cow’s milk contains the sugar lactose which many newborn babies cannot digest very well, not to mention that cow’s milk contains many proteins that are not good for an infant’s digestive system.

Another potential dietary contributor to colic is the mother’s diet while breastfeeding. Women who breast feed should stay away from spicy foods, alcohol and tobacco, as well as to avoid  eating too much of any one particular food. A semi-bland, high-protein diet that excludes dairy is probably best – at least during the first three or four months of breastfeeding.

If your baby suffers from colic, there are a few things that you can do to help with Colic Relief:

Chris was the first member of the family to become a patient of Dr. Hoch’s.  His father referred him to her since he was suffering with hip and back pain, most likely related to his flat feet.  Chris saw relief in a relatively short amount of time, and since then, pretty much our entire family now sees Dr. Hoch. I started seeing Dr. Hoch after having my son, Ethan.  While I was pregnant I experienced low back pain and although I hoped it would improve after delivery, it didn’t.  The pain became much worse, so initially my appointments were 3 times a week and then 2 weeks until I transitioned to coming 1 time a month to keep my spine in tact. This schedule has been successful in keeping my system in check.

Mia, Ethan’s big sister,  also sees Dr. Hoch and she is a pro…  As tiny as she is, she climbs right up onto the adjusting table and waits for Dr. Hoch. Each adjustment helps her immune system. Ethan was colicky after birth so we also brought him to see Dr. Hoch; he was  3 months old when he came for the first time looking for Colic Treatment.  In addition, to colic he spit-up a lot, and initially his pediatrician recommended changing his formula and adding cereal but then the next step was to prescribe medicine which I did not want to do.  So he started with weekly adjustments and then moved to every 2 weeks until he transitioned to 1 time a month also. Now his colic has gone away and he hasn’t been sick in over a month and a half. Both kids are exposed to a lot of germs and illness in day care and their adjustments are helping them to stay healthy. I see how they are warding off the sickness that other kids around them keep coming down with.  I almost feel like every time I see other kids, they’re always sick and Mia and Ethan are staying healthy.

Dr. Hoch is our family’s first choice.  We like coming here because everyone is super friendly and shares knowledge that is helpful.  I also like the fact that Dr. Hoch take the time to really look at what is going on before treating and her preferred method to treat our family is with a natural process rather than medication.  We tell others about Dr. Hoch and specifically refer patients to come see her.