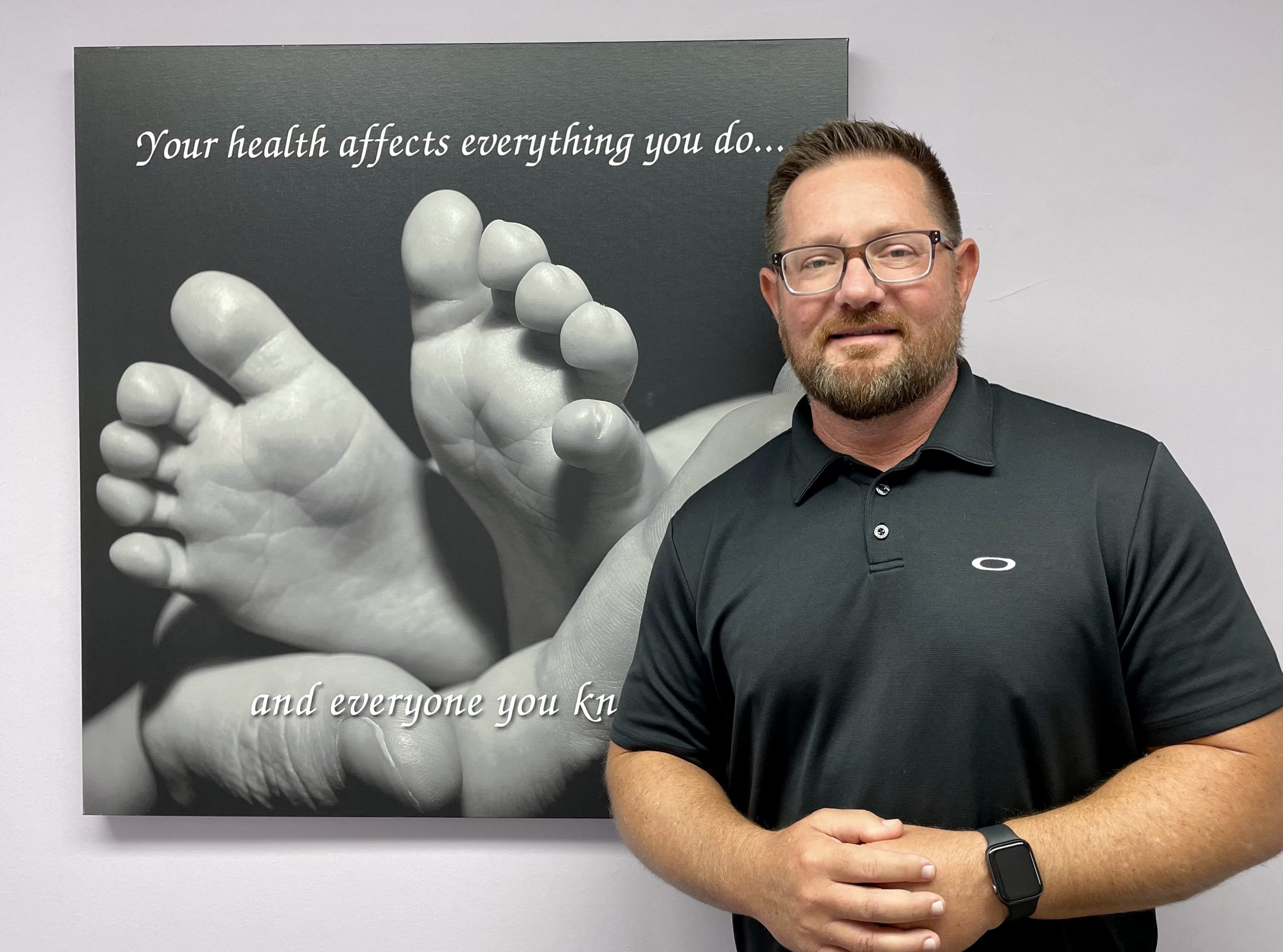 Dr. Reed’s exposure to the medical field started at an early age as four of his family members were practicing in the medical field.  This combined with a strong desire to help people led him to pursue a career in Medicine… That was until he injured his shoulder during a basketball game during his last year at Shawnee State U.  He was advised to seek care from the University team doctor for the shoulder injury, and he was offered a multitude of medications and steroids.  “The truth was, as long as I took the medications, I felt a little better. But the injury never healed and the pain and discomfort never resolved.”  Finally, someone told him,  “You need to see a Chiropractor!”.

That’s exactly what he did – he sought out a local Chiropractor to see what could be done about his shoulder injury.  After a thorough examination, he received his diagnosis:  a rotator cuff injury. His Chiropractor performed rehabilitation and adjustments to his shoulder joint, and he began to improve within a week.   Continued Chiropractic care led to his full recovery.  That was a huge turning point in his life and he decided to pursue a career in Chiropractic, rather than medicine.  “I want to help people find solutions without medications and surgery, and identify and prevent problems before they start.”

He enrolled at Logan University in St. Louis Missouri and earned his Doctorate of Chiropractic in 1998.  Over the next 22 years of study and practice, he has become a lead expert in Human Performance, utilizing a combination of Chiropractic, Nutrition, and Exercise as his focus.

Before moving to SW Florida, Dr. Reed operated a successful practice in Southern Ohio for more than 20 years. During this time he acquired over 400 hours of post-graduate education focused on Athletic injuries, Rehabilitation and Nutrition.  He has successfully treated athletes from nearly every level of competition ranging from  Student, NCAA, and Professional levels.  He was also selected to participate in a milestone Chiropractic study for the National Board of Chiropractic Examiners. This comprehensive study allowed those in the profession to reflect on the tasks, duties, and professional responsibilities typical in their everyday practice.

Outside of his Chiropractic Practice, Dr. Reed was heavily involved in coaching basketball.  His teams enjoyed great success, winning multiple championships over his 13 years of coaching.  He says about basketball, “I’m not obsessed.. but I’m really good at it.  Many times I’m the only positive male figure in a young man’s life. It’s not just all about basketball.  It’s important to me that young men have good role models and someone to teach them how to grow up to be good men themselves. For me, basketball has always been an avenue to contribute in this way.”

Dr. Reed plays many sports, including tennis, golf, snowboarding, and sand volleyball and he does strength training almost daily. “Exercise is one of the keys to a longer life. I don’t want a life in which I simply exist.  I want to live life out loud and to the fullest every day.”

Dr. Reed has 4 Children – all boys.  “My Faith and my four sons are at the center of my life. Three of my four sons live here with me in South West Florida.” Together they enjoy exploring Florida and all it has to offer, and they are involved in basketball, strength training, soccer, golf, snowboarding, hunting, and fishing.

American Muscle Cars are another love of Dr. Reed’s.  He loves to restore them from the ground up and his boys are usually involved in the fun.   “I like to call them (my boys) my mechanics because I always demand they help me with my hobby of building American muscle cars. They’re actually pretty good at it too…just don’t ask them to hold the light while you’re working on something.”

The next time you are in the office, you will no doubt, meet Dr. Reed.  He is an easy-going people person with an expansive knowledge base and loads of enthusiasm.  He is excited to get involved and raise the health and vibration of our community here at Fort Myers Chiropractic Studio.

“My goal is to help you achieve optimal health.  I am committed to finding a solution through the use of focused Chiropractic, Nutritional Support, and Rehabilitation.  I will provide information and education on how to reduce stress and achieve a balanced nutrient-rich diet.  As part of a wellness program, this will help us work together to reach your health goals and allow you to live with a reduced threat of disease and dependence on medication.”