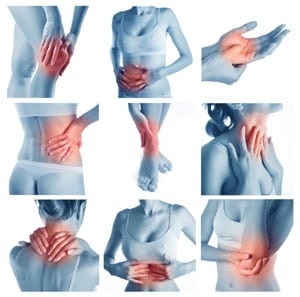 I address problems affecting the extremities with a multifaceted approach. First, alignment in the extremities is influenced by spinal posture. Consequently, a misaligned spine may spark a chain reaction that throws limbs slightly out of balance, leading to uneven wear and tear on joints above or below the affected area. If you were to come see me for an ankle problem, I’m going to also examine your pelvis and spine for areas where movement is restricted or spinal bones (vertebrae) are slightly out of place. These dysfunctional segments are called vertebral subluxations. This condition is corrected with specialized, gentle maneuvers called chiropractic adjustments. If restriction is present, it doesn’t make sense to leave them restricted as that restricted movement can continue to contribute to the presenting ankle problem.

Next, chiropractic care targets the specific joint involved. This may include gentle adjustments to or manipulation of the joint. It may also involve physiotherapy techniques or exercises custom tailored to the patients unique circumstances. In addition, ergonomic advice is a common component of an extremity care plan. And nutrition and stress reduction are often also integrated into this revolutionary approach to health.

How effective is chiropractic at alleviating problems with joints in the extremities? Following is a compilation f cutting-edge research on how chiropractic care benefits particular joints.

For instance, a single chiropractic adjustment to the spine of the neck (cervical spine) can produce a significant reduction in pain associated with lateral epicondylitis, according to one study (J Manipulative Physio Ther 2008;31:678-81). As a part of the experimental sessions on two separate days at least 48 hours apart. At each session, participants received either a cervical spine adjustment or manual contact. Findings showed that the adjustment produced an immediate drop in pain and increase in grip strength (J Manipulative Physio Ther 2008;31:678).

Other research conducted at the University of Queensland in St. Lucia, Australia reveals that a specific type of adjustments to the elbow itself produces an immediate and dramatic drop in pain for patients with tennis elbow. As part of the study, researchers tested pain-free grip strength in24 patients before and after receiving manipulation to the elbow or a placebo process procedure. Findings showed “a significant and substantial increase in pain-free grip strength of 58 percent” during treatment but not during placebo and control (Man Ther 2003;6:205-12).

Adjustments to the wrist may also keep elbow conditions at bay. You see, as forearm muscles tighten, they pull on the attachments at the wrist bones (carpal bones). Realigning the wrist bones can reset the tension of those muscles. One experiment enrolled 28 patients with tennis elbow. The subjects received either manipulation of the wrist or a standard physical therapy protocol (ultrasound, friction massage, muscle stretching and strengthening exercises).

After three weeks of intervention, the success rate among manipulation, the success rate among manipulation recipients was 62 percent, compared to 20 percent in the physical therapy group reported significantly greater improvement in pain, compared with the physical therapy recipients (5.2 out of 11 vs. 3.2 out of 11, respectively) (Phys Ther 2003;83:608-16).

A growing body of research indicates that chiropractic care is a winning solution for wrist pain due to carpal tunnel syndrome (CTS) and the lesser-known conditions that mimic it (J Manipulative Physiol Ther 2007;30:50-61)

Findings showed that the drug-free chiropractic approach was as effective as medical treatment, without the potentially hazardous side effects of painkillers (J Manipulative Physiol Ther 1998;21:317-26).

Chiropractic care is also effective for the lesser-known disorders that are often misdiagnosed as CTS. One such condition is ulnar tunnel syndrome (UTS) One scientific case study tracked a 45-year-old woman with UTS. Her symptoms resolved following four chiropractic visits during which she received wrist adjustments (J Manipulative Physiol Ther 2003;26:602-7)

How prevalent is it among chiropractic patients t seek care for shoulder pain? To find out, researchers in Australia mailed 1,037 surveys to New south Wales-based chiropractors. A total of 192 surveys were returned completed.

Results revealed that “the Prevalence of shoulder pain symptoms as reported by the practitioners was 12% of the total weekly patients, with the major cause of symptoms related to overuse (32%). … Rehabilitation strategies were also used by 89% of practitioners with a main emphasis placed on rotator cuff strengthening.”   (H Manipulative Physiol Ther 2009;23:107-17)

The advantage of chiropractic care for rotator cuff injury of the shoulder is its natural, multifaceted approach. Instead of invasive surgery, chiropractors use gentle, safe maneuvers called chiropractic adjustments, combined with specific exercises and physiotherapy that prove effective in alleviating shoulder pain (Chiropr Osteopat 2005;16:20). In my office, I also emply acupuncture to help alleviate shoulder pain.

One report in the prestigious medical journal, Annals of Internal Medicine, looked at 150 patients with shoulder problems. All patients received standard medical care. Half of the patients also underwent manipulative therapy of the shoulder joint. After 12 weeks, 43 percent of the manipulative therapy group had recovered, compared with only 21 percent of controls. When researchers checked back with the patients after one year, the same difference in recovery rate persisted.

Knee pain is associated with a restriction in joint connection the two bones of the lower leg (tibia and fibula). This joint –the tibiofibular joint – is located at the outer base of the knee.

When the knee joint is out of alignment, the kneecap (patella) may be thrown slightly off track during walking and other activities requiring the knee to bend. One study demonstrated that chiropractic adjustments not only subdue the knee pain, but they also help restore proper tracking to the kneecap (J Manilulative Physiol Ther 1990;13:539-49).

Another scientific report reviewed a case of knee pain in afflicted a patient for five years. According to the study, chiropractic adjustment of the tibiofibular joint “resulted in immediate and dramatic relief of symptoms.” (J Manipuliative Physiol Ther 1992;15:382-7.)

A third study described a patient with a torn knee meniscus. Menisci are bundles of connective tissue that cushion the inner-knee joint. This rear was confirmed by a magnetic resonance imaging (MRI). Although three separate medical physicians recommended surgery, the patient chose to try chiropractic intervention first:   consisting of adjustments to the knee and homeopathic remedies. The result? A complete resolution of pain and disability (J Manipulative Physiol Ther 1994;17:474-84).

Pain at the front of the knee (anterior knee pain) is typically associated with sacroiliac joint dysfunction. This critical joint located in the pelvis, connects the sacrum (the triangular bone at the bottom of the spine) with the illium (pelvic bones). The theory is that SI dysfunction may contribute to muscle inhibition, leading to knee pain.

In one study, researchers divided a group of 20 patients into two groups: 10 who received SI adjustments and 10 who received adjustments to their tibiofemoral (knee) joint. While both groups experienced a boost in muscle strength, researchers noted a more “significant improvement within the SI manipulation group.” (J Manipulative Physiol Ther 2006;29:145-9.)

Did you know that there are 26 bones in each of your feet? Injuries, changes in age, footwear and pregnancy can allow the bones of the feet to shift out of alignment causing foot and heel pain, ankle or even back pain.

Scientific evidence supports the use of chiropractic for ankle and foot injuries. In one analysis of 30 patients with sprained ankles, researchers found that chiropractic ankle adjustments were superior to ultrasound therapy. Adjustments significantly reduced pain and increased ankle range of motion and function (J Manipulative Physiol Ther 2001;24:17-24).

So the next time you hear your neighbor or gold buddy complain about their feet or elbows, don’t hesitate to give them my card. Extremity injuries and problems are easily solved in my office. No matter the problem, I have a solution.

One thought on “Chiropractic Adjustments for Joints in the Extremities”