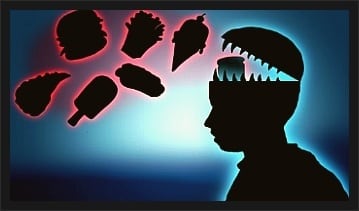 Cravings can be the undoing of the very best diet and lifestyle plans. Even when patients understand the whys and wherefores of avoiding certain foods and eating more of others, cravings for specific foods can get the better of people. This can happen even after people have shifted their diet to nutrient-dense, whole foods and have experienced improvements in their energy levels, moods, blood sugar regulation, and more. Where do cravings come from, and why are they sometimes so difficult to resist?

One theory is that cravings are indicative of nutrient deficiencies. For example, if the body is low in magnesium, someone might crave a pile of sautéed greens, or if someone could use more iron, they might get a hankering for liver. But when was the last time a patient told you they were binging on liver, or that the best part of their day was when they savored their kale smoothie? If the connection between cravings and micronutrient deficiencies is true, then there are an awful lot of people woefully deficient in the nutrients supplied by chocolate glazed donuts, and sour cream and onion potato chips.

Joking aside, there might be at least a small kernel of truth to the body asserting its needs via cravings. The phenomenon of pica describes people eating non-food substances, such as dirt/soil (geophagia), and laundry starch. It is most commonly observed in pregnant women, but other people have exhibited pica behavior. The root causes of pica are unknown, but some studies show a strong association with iron deficiency. A meta-analysis of pica and micronutrient status revealed that pica was associated with 2.35 times greater odds of anemia. Pica was also associated with lower hemoglobin concentration, lower hematocrit, and lower plasma zinc levels. Researchers were unable to determine, however, whether these blood abnormalities led to the pica, or whether pica behavior induced the abnormalities.

When it comes to food cravings, pica is the exception, not the rule. People tend to crave hyper-palatable foods—that is, flavor and texture combinations that don’t exist in nature, but whose caloric density, macronutrient makeup, and novel texture eons of evolutionary experience have conditioned us to value, even if only subconsciously. There are nearly no naturally occurring foods that are high in both carbohydrate and fat. The macronutrient combinations that are common are carbohydrate and protein (beans, for example), and protein and fat (such as beef and pork). Natural foods that are predominantly made of carbohydrate and fat, together, are notably rare, if not altogether absent. Fat is a dense source of calories, and sugar is a source of quick energy—one that was rare to stumble upon in large quantities thousands of years ago. Evolution has conditioned us to see cheesecake, milkshakes, and hot fudge sundaes as food jackpots. The modern world takes a toll as well. In the face of relentless stress and insufficient sleep, cravings for carbohydrates might be the brain’s way of seeking a mood boost, via increased transport of tryptophan across the blood brain barrier.

Certain cravings most likely are the body’s way of calling out for what it needs: something high in protein after a hard workout, for example, or something salty after someone has been sweating a lot. Cravings for calorie-rich but nutrient-poor junk-food, on the other hand—for refined carbohydrates, in particular—are most logically attributable to wild fluctuations in blood sugar. A sudden desire for sweets doesn’t come from a physiological need for the “nutrients” they provide; as we know, corn syrup and artificial colorings are not nutrients! An intense need for something sweet or starchy is the inevitable result when hypersecretion of insulin after previous carbohydrate ingestion has left someone at the bottom of the blood glucose rollercoaster, and hypoglycemia is tricking them into feeling hungry.

Since sugar and certain amino acids can modulate the endogenous opioid system, balancing neurotransmitter levels might help people with intractable cravings, as the foods sought might be the body’s way of trying to change brain chemistry. 5-HTP and L-tryptophan may help boost serotonin; Mucuna pruriens is a natural source of L-dopa, the precursor to dopamine. Vitamin B6 may help as a cofactor. L-glutamine and Gymnema sylvestre are other supplements that have proven track records when it comes to taking the edge off sugar cravings.  But, the bottom line is, if you are craving junk-food (1) you have an addictive cycle that needs to be broken, or (2) you are hypoglycemic and need a change in diet and activity to balance bool sugar. (No, a snickers bar at 3PM is not the answer.) or (3) Your body isn’t handling stress well and is in nutrient and/or hormonal debt situation.  I’m familiar with how to handle all three situations and I use acupuncture in combination with specific supplements to stop cravings and balance energy.  I focus on simple changes in diet and specific supplements to balance blood sugar.  And, I employ a combination of therapies to help patients manage stress and balance hormones.  Understanding what your cravings represent is the first step in ridding yourself of them.  Let me help you win this battle.  Call for a consultation today (239) 243-8735.